How The Nation Feels Post-Election in 6 Charts

As reports roll in about racist appointees and emboldened White supremacists, it’s easy to see that things are changing in the country that elected Donald Trump to be the next president of the United States. A new poll from Pew Research Center breaks down exactly how the nation feels about the shift.

Released today (November 21), the report catalogs responses from 1,254 voters—each of whom was previously interviewed before the election—on November 10 through 14. Here, some key takeaways from the survey, titled “Low Marks for Major Players in 2016 Election—Including the Winner.”

On race relations:
Almost half of voters are pessimistic about how Trump’s win will impact race relations in this country. From the report:

On conduct:
The nation is not pleased with the way Trump handled himself during the election cycle. 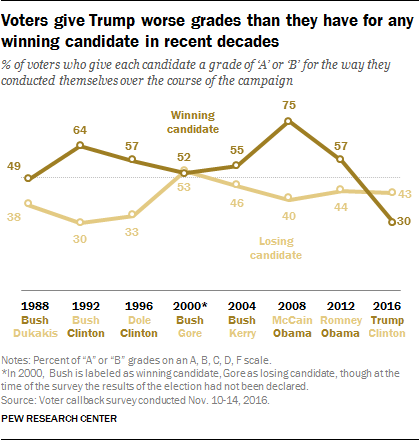 On how the election made them feel:
The respondents provided one word that best described their response to Trump’s win. For those who voted for Democratic nominee Hillary Clinton, “shocked” led the way, followed by “”disappointed” and “disgusted.” For Trump supporters, “happy” and “surprised” topped the list. 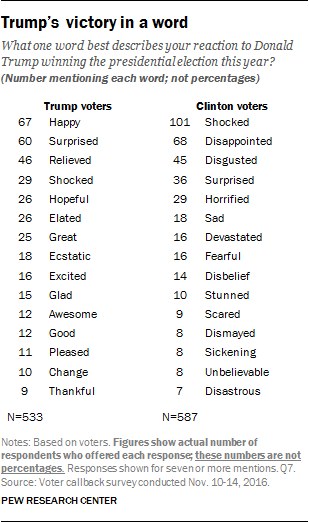 On how they feel right now:
More than half (51 percent) say they feel “hopeful.” Meanwhile, 53 percent are “uneasy.” 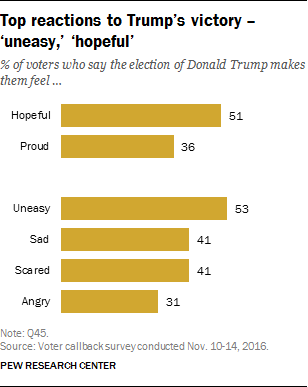 On the idea of “giving Trump a chance”:
More than half want to give him a chance to prove himself in office. Fully 39 percent are choosing to believe that he is the “person he has shown himself to be.” 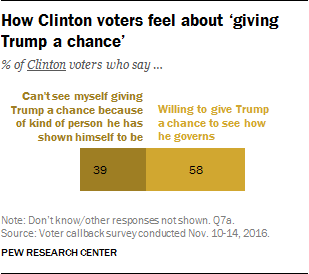 On fighting back against Trump:
Among Democratic voters, 65 percent want their party leadership to “stand up to Trump.” That number drops to 14 percent for Republicans. 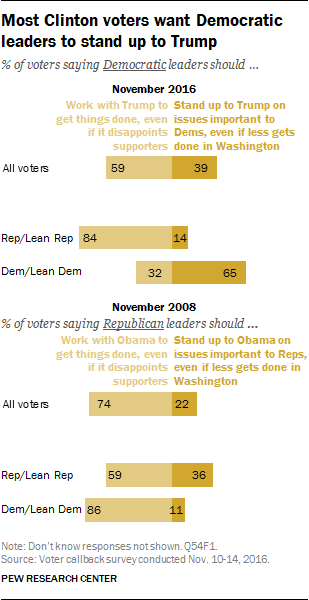